The first responsibility of a leader is to define reality. The last is to say thank you. In between, the leader is a servant. -Max de Pree

Over the years, much has been taught and written about leadership and the skills, character traits, and knowledge needed to become influential or effective leaders. Some of it has been good, some of it has been bad, and some of it has been purely self-serving. However, almost everything learned through the various leadership classes and courses I attended during my military career missed or de-emphasized something that I believe is key.

The world would say to us that leaders tell others what to do. They stand at the front of organizations and empires. They are strong and they shape situations to their will. Their ideas and actions bring change. It is the great leaders, who through their perseverance and resolute will, change the world.

Yet, there is another perspective. Sometimes we can see glimpses of its truth in leadership manuals or courses. Sometimes it can even be seen in the memoirs or writings of great leaders. It is a heavenly kingdom perspective, and it is counter to most commonly held beliefs.

He sat down, called the Twelve, and said to them, “Whoever wants to be first must be least of all and the servant of all.” Mark 9:35

To become an influential or effective leader, you must learn to follow first. Learn about those you lead. Walk in their shoes. Understand their trials and motivations. See the world through their eyes. Then you will know how to best incorporate the following three characteristics into your daily interactions with those you lead.

Encourage the Potential You See in Others
Your most important task as a leader is to recognize the potential that exists in every person. As you recognize it, you must call it out. You must be a champion of the possible. Speak positive words that help foster and grow a person from where they are into who they can become.

It is critical that you speak more about others than about yourself. While your experience and wisdom are key to helping them grow, always remember that it’s not all about you. By pouring into the next generation you are creating a culture that strives to advance and improve—one that moves from where we are into the greatness for which we were created.

Being an encourager does not mean you shouldn’t use failure as learning opportunities or you never correct mistakes. By no means! Failure is often the key to opening the door to success. But you must never belittle a person to correct a mistake. Your whole focus is on helping them to realize the greatest potential that exists inside of them.

Empower Your Followers to Succeed
You must release people into the potential you see and encourage. You must get out of the way and let them take ownership of their life and work. You must stand behind them and cheer them on to greater success, and you must give them the authority to be successful.

When you give them the authority they need to excel in their tasks, you give them the opportunity to step into the potential you identified in them. Maybe you shouldn’t start by giving them the keys to the kingdom, but you can certainly give them enough authority to accomplish what you ask of them.

It is better to lead from behind and to put others in front, especially when you celebrate victory when nice things occur. You take the front line when there is danger. Then people will appreciate your leadership. Nelson Mandela

Eliminate Obstacles
As a leader, you have the ability to remove obstacles that others may not have the authority or knowledge to remove. You must break down barriers without lessening the challenge. You must allow them to explore all their options to solve the problems they face. You smooth the paths for them to walk into success; you help them identify the dead ends. You have the experience to know when something is an obstacle to overcome or a path to be abandoned.

It really is very simple. You remove obstacles. You give direction and advice. You get out of the way. You let them forge the path. You launch trailblazers. 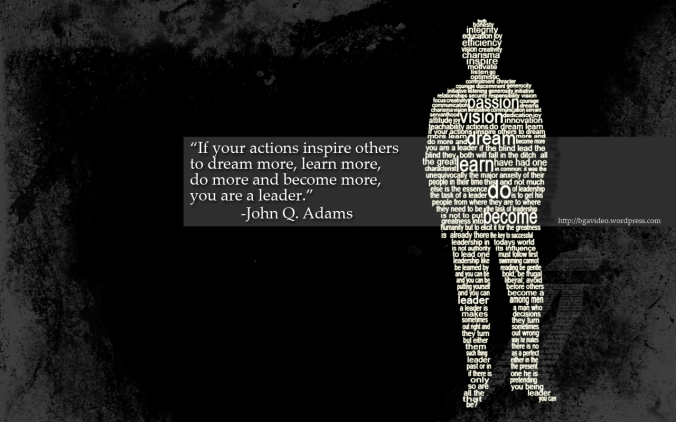 You have a unique opportunity to cheer on another generation as it moves into the heavenly potential for which they were created. You become a destiny-maker when you take on the mantle of a servant.

One thought on “Three Characteristics of an Influential Leader”